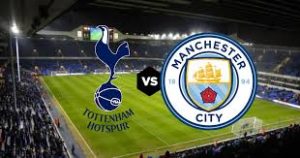 Tottenham hosts Manchester City in a match from the 34th round of the Premier League. The game is going to be played at Saturday evening at the Wembley.

Manchester City are going to be the next champion of England and it’s clear now. The Citizens are leaders in the league with 84 points, having 13 points advantage in front of Manchester United. They had the chance to win the league last week, but they suffered a home defeat against United.

Right now Man City have a record of 27 wins, 3 draws and just 2 defeats. During the week they were kicked out from the Champions League, so now they can concentrate entirely on winning the Premier League.

Before losing to Manchester United, Manchester City were in a long run of consecutive wins. They have been the best team in England this season and they deserve to be champions. Of course, there will be some hurt because of the bad two matches against Liverpool in the Champions League, but it is what it is.

This is going to be Pep Guardiola’s second trophy in England, after winning the Carabao Cup. If Manchester City continue to perform like this, it’s going to be very hard for anyone to stop them next season.

Tottenham on the other hand are eager to underline their presence in the Top 4. Right now Spurs are 4th in the Premier League standings, having a healthy 10 points advantage in front of Chelsea. We can say that they are very close to achieve their main goal during the campaign – to finish in the Top 4 and to qualify for the Champions League once again.

It’s going to be a spectacular game between Tottenham and Manchester City at the Wembley. Whatever you have decided about it, good luck!