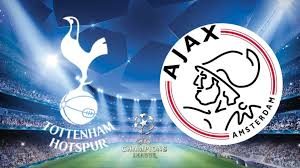 Tottenham Hotspur hosts Ajax in a first leg from the 1/2-finals of the Champions League. Let’s take a look at this clash at the Tottenhah Hotspur Stadium in London.

Tottenham made a huge step in the previous round, when they eliminated Manchester City during the 1/4-finals of the competition. After a 1-0 win in the first game in London, Spurs lost the second leg at the Etihad with 4-3. Despite of the loss, Mauricio Pochettino’s team progressed towards the 1/2-finals. It was Fernando Llorente who scored the decisive goal in Tottenham’s favour.

The English club is playing for something historical so far, because never in their history Tottenham have reached the Champions League final. If they manage to eliminate Ajax and reach the final in Madrid, Pochettino’s players will rewrite history.

But it’s going to be hard, because Ajax are the big revelation of the Champions League this season. The Dutch side already eliminated two of the big favourites for the trophy – Real Madrid and Juventus. They did it with a lot of style, winning the second legs in Madrid and Turin. Clearly they are very, very strong away from home.

In their last two away games in Madrid and Turin, Ajax managed to score 6 goals. This means that Tottenham must be very careful at the back, because the Dutch side plays very dangerous football and basically can score at anytime.

Tottenham’s biggest absentee is Harry Kane, who won’t be avaliable for the two matches against Ajax. Most likely players like Son Heung-Min and Lucas Moura will have to carry the weight in attack, supported by Christian Eriksen and Dele Alli.