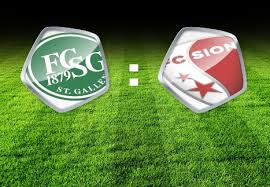 St. Gallen hosts Sion in a match from the 2nd round of the Swiss Super League. Let’s have a look at this game which is going to be played at the Kybunpark in the city of St. Gallen.

St. Gallen started the new season with a surprising 2-1 win during the visit to Basel. Cedric Itten and Vincent Sierro scored the winning goals for the visiting team, while Jordi Quintilla scored himself an own goal in Basel’s favour. However, the former champion didn’t find a way to score at least one more goal to avoid losing in the opening round.

This was a great start for St. Gallen. Beating Basel is always a tough thing to do, but they did it. And they didn’t just do it, but they did it on Basel’s ground, which makes it even more impressive. Last season St. Gallen finished 5th in the league, being unable to qualify for the European competitions. Can they do it now?

Sion started the new season with a loss, losing with 1-2 against Lugano at home. Anto Grgic from a penalty kick scored the only goal for Sion in the game, but it was not enough for something more in the match. It was a dissapointing thing to start the new season with a home loss, but more or less, it’s just the opening round. Sion have enough time to do better in the next rounds of the league.

We think it’s pretty obvious that St. Gallen are the big favourite here. They are not just playing at home, but they also beat Basel in the previous round. This is going to increase their confidence and help them make it two in a row. As for Sion, they had a tough start of the new season. It’s going to be even more difficult for them against St. Gallen away from home.