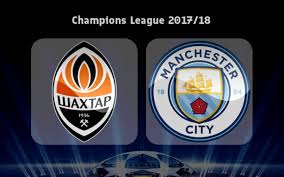 The winner of Group F of the Champions League Manchester City travels to Ukraine to meet Shakhtar Donetsk.

After winning five matches in a row, Manchester City easily won this group. Josep Guardiola’s team looks much stronger than it was last season and now The Citizens are labeled as one of the favourites of winning the Champions League trophy. Their performance in the group is impressive – they won five games out of five with a goal difference of 13:3.

Meanwhile Shakhtar are in a pole position to win the second place in the group and qualify for the 1/8-finals. The Ukrainian team have three points advantage in front of Napoli, so even a point against Manchester City will be enough for Shakhtar to reach the knockout phase of the competition.

Of course, it won’t be easy against the English team, even if Manchester City play with its reserves against Shakhtar. You can be sure that CIty’s backup players will be hungry for minutes and the chance to prove themselves to Guardiola. Of course, Shakhtar’s chances are much bigger in this situation, but one should not think that it’s going to be a walk in the park for them.

The first game between Manchester City and Shakhtar at the Ettihad Stadium ended with a 2-0 win for the Citizens. The Ukrainian team played good in this game, but it was difficult for them to get a positive result against Manchester City’s top players. Now many of these players will get a rest from Guardiola.

A lot of what happened in this group is surprising. Most of the people expected that Manchester City and Napoli won’t have problems to qualify for the next phase of the competition. Man City didn’t have ones, but for Napoli it’s a totally different thing.