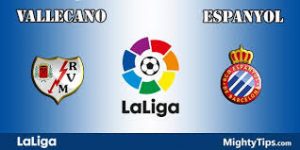 Rayo Vallecano hosts Espanyol in a match from the 7th round of the Spanish La Liga. Let’s take a look at this clash at the Estadio del Rayo Vallecano.

Rayo Vallecano are currently 18th in the league standings with 4 points won from 5 matches played. They are currently in the relegation zone of the league with a record of 1 win, 1 draw and 3 defeats. Rayo’s only win for the season so far came against Huesca away from home. In their last two games they won just one point – during the draw with Real Sociedad.

Rayo’s main goal for the season is going to be survival, of course. They don’t have the potential or the quality to fight for something more than this at this point. But if they manage to keep their place in La Liga, it’s going to be a successful season for them.

Espanyol started the new campaign in the Spanish elite pretty good. Los Pericos are 6th in the league standings with 10 points won so far and a record of 3 wins, 1 draw and 2 losses. In their last three games they won twice – against Levante and Eibar, but suffered a defeat against Real Madrid at the Bernabeu.

In their last game Espanyol enjoyed a difficult, but important 1-0 win against Eibar at home. The only goal in the game was scored by Mario Hermoso during the second half. This was a second consecutive 1-0 win for the Catalan team.

This is our look at the La Liga match between Rayo Vallecano and Espanyol. Based on performance since the start of the new season, Espanyol are a slight favourite to take the win here. But Rayo are in a serious need of points at the moment, so don’t underrestimate them.