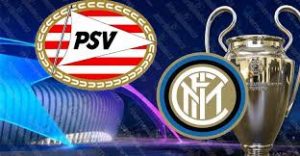 After suffering a big defeat against Barcelona at the Camp Nou, PSV are looking for first points in the Champions League. Mark van Bommel’s team hosts Inter in a game from Group B of the competition.

It was not a good experience for PSV to visit Barcelona at the Camp Nou. The Dutch champions suffered a heavy 0-4 defeat, being unable to hold Lionel Messi, who scored a hattrick. We saw it clearly that the difference in the level between these two teams was pretty big. PSV tried to show their qualities in the Catalan capital, but they were outperformed in every aspect of the game.

If we forget about this result for a while, we shall say that Mark van Bommel is doing pretty well managing PSV. His team is perfect in the Eredivisie, winning all of its 7 matches so far. Right now PSV are leading the standings in the Dutch league, having 5 points advantage in front of Ajax. In their last game PSV enjoyed a 2-0 win during the visit to NAC Breda, thanks to goals from Luuk de Jong Donyell Malen.

Inter won their first game in the competition for the season, beating Tottenham with 2-1 at home. The Nerazzurri found them behind in the result after Cristian Eriksen’s goal, but they managed to win with two late strikes from Mauro Icardi and Matias Vecino. For Inter was important to win this match, firstly because this group is difficult, and secondly – because this was their first game in the Champions League from some years.

That’s what we had to say about the Champions League clash between PSV and Inter on Wednesday night. PSV are doing very well in the Eredivisie, but can they perform like this in Europe as well? Inter on the other hand could make an important step towards the next phase of the competition.