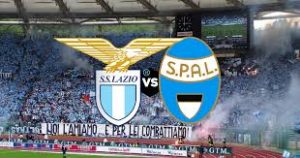 Lazio welcomes SPAL in a game from the 11th round of the Italian Serie A. This match is going to be played at the Stadio Olimpico in Rome on Sunday afternoon.

Lazio are currently 5th in the Serie A with 18 points won so far. The Eagles have a record of 6 wins and 4 defeats since the start of the season, which is telling us that they are a little bit inconsistent. In the previous round Simone Inzaghi’s team suffered a defeat, conceding a very dissapointing 0-3 defeat at home against Inter. This was an important game for Lazio, but maybe Inter surprised them with how good they were on this day.

Right now Lazio are on par with the 4th Milan – both teams have the same amount of points, so they are very close to the Top 4, which is their main goal for the season. Last season Lazio lost their place in the Top 4 in the last round of the league, which was heartbreaking. Now their main goal is to avoid this happening again.

Their next opponent SPAL are currently 15th in the Serie A with 12 points won. SPAL’s record so far shows 4 wins and 6 defeats. In their last five games SPAL suffered four defeats, but surprisingly won against Roma at the Stadio Olimpico. This is the reason why Lazio have to be very careful in this match.

After the surprising win against Roma, SPAL suffered another defeat, conceding a 0-3 loss against Frosinone at home. The club’s fans hoped that the team would be inspired after the win against Roma, but nothing worked for Leonardo Semplici on this day.

That’s our thoughts about the Serie A clash between Lazio and SPAL at the Olimpico. We wish you good luck with this one!