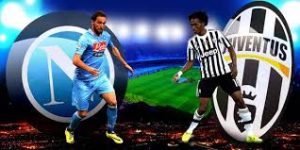 The champion and current leader in the Italian Serie A Juventus hosts Napoli in the most interesting game of the 30th round of the Italian league.

Once again, The Old Lady from Turin seems unstoppable in the Calcio, having a comfortable 8 point advantage in front of Roma. Napoli are currently third with 10 points behind Juve and their main goal remains winning the battle with Roma for the 2nd spot, which means a direct qualification for the Champions League.

Both teams are showing good form in their last five Serie A games, winning four of them. Maurizio Sarri’s Napoli are arguably one of the strongest teams in Italy, but in same time Juventus’ overall class is making The Bianconeri an unstoppable force in Italian football at this moment.

Despite of that, both teams still have a lot to play for. Juventus will have to finish the job, before they start celebrating winning another title. For Napoli it’s still an open battle for the second spot, so nothing is over yet for both teams.

Juventus’ manager Max Allegri will have to deal with the absence of the talented Croatian Marko Pjaca, who is out for the season with a serious knee injury. Mario Mandzukic, Moise Kean, Paulo Dybala and Mehdi Benatia remain doubtful for the game.

As for Napoli, Maurizio Sarri still doesn’t know if he’d be able to use the Spanish goalkeeper Pepe Reina, who is recovering from a calf injury. Elseid Hysaj is also doubtful for the clash with the champions.

Another reason to expect this game with a huge interest is the fact that we are going to see a clash between the best attack and the best defense in the Serie A. Napoli have scored 68 goals in the Serie A – more than any other team, while Juventus have conceded just 19 goals in 29 games.