The facts are clear: Juventus are in a slightly better position before the second leg. This is because the first leg in Amsterdam ended with a 1-1 draw. Juve’s superstar Cristiano Ronaldo opened the score for the Old Lady, but David Neres equalised for Ajax.

Ajax’s task in Turin is very complicated. They must score at least one goal in the game in order to neautralise the result from the first leg. But attacking Juve is always very risky, because the Italian side could punish you anytime with its counterattacks. To have a chance to reach the 1/2-finals, the Dutch side must find the perfect balance between defense and attack. And try to repeat its performance from the second game against Real Madrid at the Santiago Bernabeu. 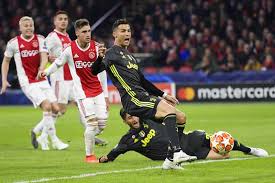 Of course, Juventus’ biggest weapon for Tuesday is called Cristiano Ronaldo. The Portuguese phenomenon is always in a deadly form when the Champions League knockout phase starts. He scored a hattrick against Atletico Madrid in the 1/8-finals, which once again proved that he’s always there when his team needs him. In the same time, Ajax can anwer with talented players like the captain Mathijs de Ligt, Frenkie De Jong, David Neres and Dusan Tadic. Whoever thinks that the Dutch team doesn’t hold any chance to win on Tuesday is very wrong.

In conclusion we have to admit that Juventus are favourite to win against Ajax. The result from the first leg favours the Italian side and it’s a fact. But in same time Ajax are a very dangerous team which is ready to punish every mistake.