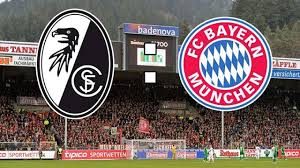 Freiburg hosts the champion and current leader in the Bundesliga Bayern Munich in a game from the 27th round of the league. Let’s take a look at this fixture, which is going to be played on Saturday afternoon.

Freiburg are having an average season in the Bundesliga so far, being 11th in the standings with 31 points won so far. Their record in the league looks like this: 7 wins, 10 draws and 9 losses. In their last five matches in the Bundesliga Freiburg lost only once – against Bayer Leverkusen. They also won twice and suffered two defeats.

In their last game in the Bundesliga Freiburg shared the points with Borussia M’gladbach for a 1-1 draw away from home. Vincenzo Grifo opened the score for Freiburg, but Alassane Plea equalised for the home side.

Right now Freiburg are just 4 points behind the 10th Hertha BSC, so entering the Top 10 is not an impossible task for the team.

Bayern Munich won all of their last five games in the Bundesliga, which allowed them to overtake Borussia Dortmund at the leading spot in the table. Both teams have the same amount of points at the moment – 60, but the Bavarians have better stats.

How we said, right now Bayern are in a very strong run of results, being merciless lately. In their last match Niko Kovac’ boys showed their strenght, scoring six times against Mainz 05 at the Allianz Arena. The Colombian midfielder James Rodriguez scored a hattrick for the champion, while Robert Lewandowski, Kingsley Coman and Alphonso Davies also scored for the home team.

After having a lot of problems in the first half of the season, now Bayern have slowly turned into the number one favourite for the title again. The Bavarians are in a terrific shape, which makes them a huge favourites against Freiburg as well.