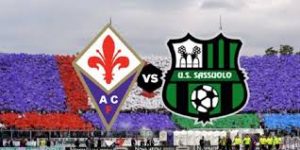 >Fiorentina welcomes Sassuolo in a game from the 34th round of the Italian Serie A. Let’s take a look at this fixture at the Stadio Artemio Franchi on Monday evening.

Fiorentina are currently 11th in the Serie A with 40 points won so far and a record of 8 wins, 16 draws and 9 losses. It has not been the best season for La Viola, which led to the resignation of the manager Stefano Pioli, who was replaced by Vincenzo Montella. Montella led the team in two games already, but without a win so far. In his first game the team made a 0-0 draw against Bologna, while in the second one Fiorentina lost their visit to the champion Juventus.

During the week Fiorentina suffered another dissapointment. The club had the chance to qualify for the Coppa Italia final, but La Viola lost the second 1/2-final game against Atalanta in Bergamo. It seems that Montella is going to need some more time in order to transform the team and make it more competitive again.

In the same time Sassuolo are 12th in the Serie A with 38 points won so far. For them the most important thing is to oficially secure their survival in the league for another year. RIght now they are 9 points ahead of the 18th Empoli, which is a very good gap.

So far in the league Sassuolo have a record of 8 wins, 14 draws and 11 losses. In their last five games Roberto De Zerbi’s boys won once, made three draws and lost only once against Bologna. Right now Sassuolo are in a run of three consecutive draws in the league.

These are our thoughts about the Serie A fixture between Fiorentina and Sassuolo on Monday night. We believe that the home team is a slight favourite here, but Sassuolo won’t be easy to beat.