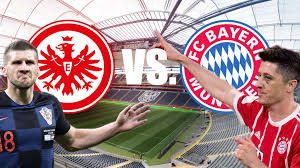 Eintracht Frankfurt faces Bayern Munich in a game from the 17th round of the Bundesliga. Let’s take a look at this fixture between the DFB Pokal winner and the current champion of Germany.

Eintracht Frankfurt are doing well since the start of the season. They are currently 5th in the standings with 27 points, being just one point behind the 4th RB Leipzig and the Champions League zone. After winning the DFB Pokal last season, now Eintracht have another big goal – to qualify for Europe’s biggest competition.

In their last five games Eintracht are a little bit inconsistent though. They won twice, but also suffered two defeats and made one draw. The draw happened against Mainz 05 at the Opel Arena in the previous round. The match ended 2-2. Both goals for Eintracht were scored by Luka Jovic, but Robin Quaioson’s goals saved Mainz from a loss.

Bayern Munich on the other hand are 3rd in the standings with 33 points, trailing on 9 points behind the leader Borussia Dortmund. But here’s the moment to remind you that Bayern have a game in hand, compared to Dortmund.

In their last five games the Bavarians are doing much better – one draw and four consecutive wins. In their last fixture they achieved a difficult, but important 1-0 win over RB Leipzig at home. The French veteran Franck Ribery scored the only goal in the game in the 83th minute.

It’s a curious fact that Bayern’s manager Niko Kovac was leading Eintrach Frankfurt last season, winning the DFB Pokal with them. Now he shall use his knowledge for the team in Bayern’s favour, of course.

That’s what we had to say about the Bundesliga clash between Eintracht Frankfurt and Bayern Munich on Saturday, We wish you good luck with this one!