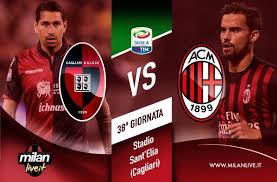 Cagliari faces Milan in a match from the 4th round of the Italian Serie A. Let’s take a look at this game at the Sardegna Arena in the city of Cagliari.

Cagliari started the new season with a record of one win, one draw and one loss. Right now the Rossoblu have 4 points won and they are 12th in the league standings. Cagliari kicked off their season with a loss against Empoli away from home, which was followed by a 2-2 draw at home against Sassuolo. In the previous round the Rossoblu enjoyed their first win for the season, beating Atalanta on the road with 1-0.

This was a surprising result, taking into account that Atalanta are a very solid team. Nicolo Barella scored the only goal in the game in Bergamo. Most of the pundits expected that Atalanta are going to win this match, especially at home, but Cagliari caused an upset.

Milan are 14th in the Serie A with 3 points won from two matches played. The Rossoneri are with a game in hand, compared to the most of the other teams. They started their season with a loss against Napoli at the Stadio San Paolo, which was followed by a dramatic win in the last few seconds against Roma. The coach Gennaro Gattuso have to thank the young Patrick Cutrone, who scored a late winner against the Wolves at the San Siro.

Last season Milan didn’t qualify for the Champions League, so now the goal in front of the Rossoneri is a Top 4 finish in the Calcio. It won’t be easy, but the club made some good signings during the summer. Maybe this time they can do it. As for Cagliari, the Rossoblu’s main goal is going to be a midtable finish and survival.