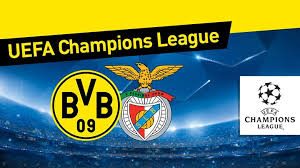 After beating Borussia Dortmund with 1-0 in the first leg in Lisboa, now Benfica will try to finish the job against the German giants at the Signal Iduna Park in Dortmund. They are in a better position to attack the 1/4-finals of the competition, but it’s not going to be an easy 90 minutes for them in Germany.

Many people were surprised by Benfica’s win against Dortmund in the first leg, especially after the Germans were labeled as favourites before the clash. But once again Benfica proved to be a major team in this competition, showing a lot of confidence and ability against Thomas Tuchel’s squad.

Now it’s time for Borussia Dortmund to go “all in” against the Portuguese team, especially with playing at home. But the Germans should be very careful, taking into account that even one away goal for Benfica could make their task near impossible. They need to attack, but they need to do it smart and intelligenty.

Mario Götze and Marco Reus are missing the game at Signal Iduna Park, but Thomas Tuchel still have reasons to be optimistic before the clash. The reason for that is the impressive form of Ousmane Dembélé, Pierre-Emerick Aubameyang and Christian Pulisic, who all scored in the Bundesliga on Saturday. Dortmund will need their offensive players to perform at their absolute best, if they want to eliminate a strong team like Benfica.

Konstantinos Mitroglou scored the only goal in the first leg between the two teams, so now it’s expected the Greek striker to lead Benfica’s forward line once again. Dortmund’s defence will have to watch out for players like Andre Carillo, Rafa Silva and Eduardo Salvio as well, because they could provide a great danger for Roman Bürki at any time.

We should expect a great tactical battle at the Signal Iduna Park in Dortmund. The home team needs to score goals, but they also know that they should not concede. Benfica on the other hand are aware that every goal scored away from home will mean a lot bigger chance for qualifying for the 1/4-finals.