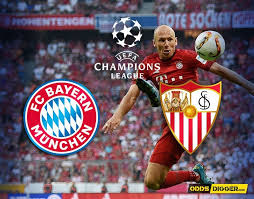 Bayern Munich won the Bundesliga for a sixth consecutive time, but now their main goal remains winning the Champions League for a first time since 2013. And their next step is against Sevilla at the Allianz Arena in the Bavarian capital.

A week ago Bayern did a solid step towards the elimination of Sevilla. Jupp Heynckes’ team won the first leg at the Ramon Sanchez Pisjuan with 2-1, thanks to an own goal by Jesus Navas and a goal from Thiago. Now the German giants know that all they have to do is just finish the job.

When Bayern sacked Carlo Ancelotti last year, they picked the right man for the job – the legendary Jupp Heynckes. He’s the man who led Bayern to the historical treble in 2013. After a few years of break, now Heynckes is ready to win the Champions League for a third time in his spectacular career.

Under his management, Bayern easily dominated the Bundesliga. But now we are talking about different leves, because winning the Champions League is a completely different type of effort.

Sevilla on the other hand already did enough in the Champions League to be proud of themselves. Reaching the 1/4-finals is an amazing achievement, especially with eliminating a club like Manchester United in the 1/8-finals.

Because of their position in La Liga, most likely we won’t see Sevilla in the Champions League next season. So, they have to enjoy what’s about to happen at the Allianz Arena. This might be their last game in the competition for a some time.

Of course, Sevilla remain a very solid team. But after a result like this on home ground, their chances are very slim at the Allianz Arena. Bayern are not a team who would miss such an advantage in the result.