Bayern Munich welcomes Liverpool at the Allianz Arena in a second leg from the Champions League 1/8-finals. The tie looks very open now after a 0-0 draw in the first leg at the Anfield. Both teams are close to the next phase of the competition, but they have to make the decisive final step.

After a great tactical battle at the Anfield, which ended without any goals being scored, now these two teams have to start scoring goals in order to progress in the competition. Bayern Munich will have the solid advantage to play at home at the Allianz Arena, but Liverpool will have a great opportunity to use their strong counter-attacks.

Bayern Munich are usually in attacking mode when playing at home, but against Liverpool it could be a very dangerous thing. The Reds have very pacey forwards like Sadio Mane and Mohamed Salah, who are ready to use their pace in every moment. Bayern’s manager Niko Kovac is aware of this, so maybe Bayern will be a little more conservative when it comes to attacking on Wednesday night. 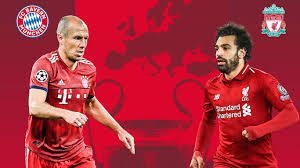 As for Liverpool, last year they reached the final of the Champions League, but suffered a defeat from the hands of Real Madrid. Now Jurgen Klopp’s boys are motivated to do the final step, reaching for their first Champions League triumph since 2005 and the memorable night in Istanbul.

Liverpool’s problems before this game are related to the injury of the full back Trent Alexander-Arnold. It’s still not clear if the talented youngster will be fit to play in Munich, but the Reds are hopeful that he will be ready.

In conclusion we can say that we expect a pretty great game between Bayern Munich and Liverpool at the Allianz Arena on Wednesday night. One of these two amazing teams will have to leave the competition, though.