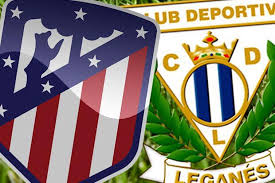 Atletico Madrid hosts Leganes in a match from the 27th round of the Spanish La Liga. Here are our thoughts about this clash at the Wanda Metropolitano in the Spanish capital.

At this moment Atletico are 2nd in La Liga with 53 points, trailing on 7 points behind the leader and current champion Barcelona. On theory Los Colchoneros still have chance to become the new champion, but it won’t be easy for them to reduce such a huge gap to Barca. Especially when Barcelona are rarely making mistakes.

After suffering two consecutive losses in the league, Atletico won three times in a row. In their last game Cholo Simeone’s boys achieved a win at a difficult ground, beating Real Sociedad at the Anoeta. The new signing Alvaro Morata showed a pretty good form against the Basques, scoring twice for Atletico.

Even if they can’t win the title, Atletico would like to keep the 2nd place. Right now they have 5 points advantage in front of the 3rd Real Madrid.

Leganes on the other hand are 11th in La Liga with 33 points won so far. They have a record of 8 wins, 9 draws and 9 defeats in the league. In their last five games Leganes won three times, made one draw and suffered one loss.

In their last game Leganes achieved a win, beating Levante with 1-0 at home at the Estadio Butarque. The only goal in the match was scored by Oscar Rodriguez after just 13 minutes of playing.

Arguably Atletico Madrid are favourites to beag Leganes, but have in mind that just few days later Diego Simeone’s boys will have a crucial visit to Juventus in the Champions League. We shall expect that Simeone will make a lot of rotations for the match with Leganes in order to keep his stars fresh.