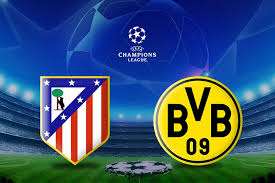 Atletico Madrid hosts Borussia Dortmund with the thought of revenge in a match from Group A of the Champions League.

We call it a wish for revenge, because the first match between these two sides in Dortmund ended with a 4-0 win for the German team. This was really unexpectable, because you can rarely see Diego Simeone’s Atletico suffering heavy defeats like this.

It was a great night for Borussia Dortmund at the Signal Iduna Park. Lucien Favre’s outperformed Atletico in every aspect of the game. The four goals in Jan Oblak’s net were scored by Axel Witsel, Raphael Guerrero (twice) and Jadon Sancho. Atletico put their best players on the pitch, but this was just their day.

In the German Bundesliga Borussia Dortmund are leading the standings with 4 points advantage in front of the 2nd Borussia M’gladbach. It seems that Dortmund are once again ready to challenge for the title, after years of undeniable domination by Bayern Munich. In their last match Dortmund enjoyed a 1-0 win during the visit to Wolfsburg, which allowed them to keep the distance at the top of the standings.

Atletico Madrid are 2nd in Group A with 6 points, being on 3 points behind Borussia Dortmund. Before losing in Dortmund, the Spanish team enjoyed wins over Monaco and Club Brugge in the group. It’s clear that these two teams will qualify for the 1/8-finals. The question is – who will finish on top?

In La Liga Atletico Madrid are 3rd in the league standings with 20 points, being 4 points behind the leader Barcelona. In their last match they made a 1-1 draw against Leganes away from home.

That’s what we had to say about the Champions League clash between Atletico Madrid and Borussia Dortmund at the Wanda Metropolitano.