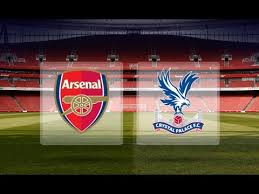 Arsenal welcomes Crystal Palace in a match from the 35th round of the English Premier League. Here are our thoughts about this clash at the Emirates Stadium in the capital.

Arsenal’s primary goal for the season remains finishing in the Top 4 and returning to the Champions League next season. Right now the Gunners are 4th in the standings with 66 points, being on one point behind the 3rd Tottenham and on par with the 4th Chelsea. How you can see, the fight for the Top 4 is really intense at the moment, so Arsenal need every point they can win.

In their last game in the Premier League the Gunners visited Watford and enjoyed a 1-0 win at the Vicarage Road. The only goal in the game was scored just 10 minutes after the start of the match, when Pierre-Emerick Aubameyang scored for the visitors.

During the week Arsenal had a game in Europa League as well, travelling to Napoli and beating them with 1-0 at the San Paolo.

In the same time Crystal Palace are 13th in the Premier League standings with 39 points won. Palace have a record of 11 wins, 6 draws and 17 defeats since the beginning of the season. In their last five matches Roy Hodgson’s boys won twice, but also suffered three losses.

Crystal Palace’s last game in the league ended with a defeat. They hosted the champion Manchester City, but got beaten with 1-3 at the Selhurst Park. Luka Milivojevic scored for the ome side, but City were just better and dominated the game.

Despite of playing in Europe during the week, Arsenal are favourites against Crystal Palace. Unai Emery knows how important is to win right now in the Premier League, so you shall expect a very motivated Arsenal on Sunday.