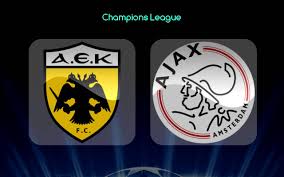 AEK Athens welcomes Ajax in a match from Group E of the UEFA Champions League.

AEK are currently 4th in the group, still without a point won. The Greek team have a 0 points at this moment and a record of 4 losses from 4 games played. Clearly AEK are the outsider in this group and most probably they are going to finish 4th.

In their last game the Greek side suffered a 0-2 defeat during the visit to Bayern Munich at the Allianz Arena. The Polish striker Robert Lewandowski scored both goals for the Bavarians, who didn’t face a lot of problems at their own ground.

In the Greek Super League AEK are also not performing well lately, suffering two consecutive defeats against Atromitos and Panaitolikos. If we add the 0-0 draw with Panathinaikos as well, it means that right now AEK are without a win in three consecutive games. They are currently 6th in the Super League standings with 17 points.

Ajax on the other hand are second in the group with 8 points won so far and a record of 2 wins and 2 draws. The Dutch team is aware that a win in Athens would mean that they are qualifying for the 1/8-finals of the Champions League. Right now Ajax have 4 point advantage in front of the 3rd Benfica.

In their last game Ajax faced Benfica in Lisboa and the match ended with a 1-1 draw. It was a great strategical result for the Dutch side, because now they need just one win in the next two games in order ot ensure their qualification for the next phase.

These are our thoughts about the Champions League clash between AEK and Ajax in the city of Athens. We wish you good luck.